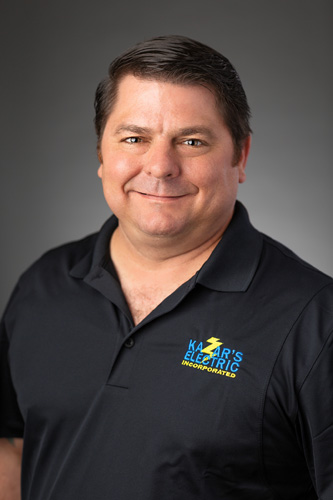 I have been in the electrical trade for 23 years. I started out as David’s helper not knowing anything about electricity beyond plugging something in or turning on a switch. I learned quickly under the direct supervision of a master electrician whose reputation for quality was unsurpassed. I also learned how valuable maintaining relationships with customers was, and that going the extra mile for people was never over-looked.

Using the skills I learned from David, my journey continued through the residential boom of the 90s for a different company. I rose through the ranks very quickly with them as my reputation and hard work had proven my ability to manage a team to success all while being within budget and time constraints. After the residential market crashed, I began my walk through the service end of the trade, and learned how a successful service department should be managed. A few years later, I shifted my focus to running large commercial projects. After managing several multi-million dollar projects throughout the state, that company went through a drastic re-alignment, which all but eliminated the commercial division. At that point, I was tasked with completing the remaining commercial projects.

7 Years ago, I looked up Mr. Kazar and presented him my resume. He didn’t hesitate to hire me back as a commercial electrician. I worked very closely with Monty, perhaps the best project manager I will ever know, as we took on a few large projects together. Not long after, I was promoted to project manager, and managed a multitude of successful projects ranging from small tenant build-outs to multi-floor class-A projects. I’ve also managed multiple government projects, and most recently entered the design-build arena.

My tenure as a commercial project manager has now been enhanced with taking over the service division. My goal now is to build the most successful electrical service company in the area, and I will utilize my years of diversified knowledge, and my faith in the Lord, to lead my team to that goal.